Join us in celebrating 20 years of African and Asian Studies. The Editor-in-Chief, Tukumbi Lumumba-Kasongo, has specially selected the following articles from the journal archive to share with you.These articles will remain free access until December 31st 2021. No need to sign up for an account. 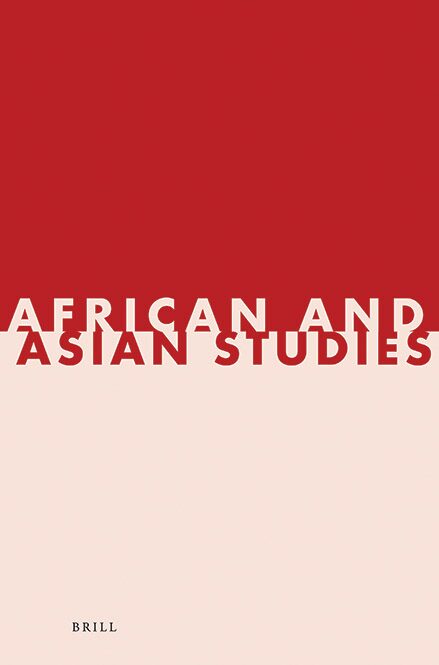 (2) Transformation of ECOWAS as a Security Apparatus and Its Implications in Ghana's Political Orientation, 1990-2000, by Joshua Dapaah-Agyemang
2003 Volume 2, Issue 1.

(3) Distance Learning and Virtual Education for Higher Education in Africa: Evaluation of Options and Strategies, by Stanley Moyo
2003 Volume 2, Issue 4

(4) Cultures of Political Recycling and Conflict Resolution in Japan: Any Lessons for Africa?, by  Seifudein Adem
2004 Volume 3, Issue 1.

(6) A Study on the Outline History of the Household Responsibility System in Rural China Since 1949: The Organizations, Institutions, and Their Changes, by  Feng Kaiwen
2004 Volume 3, Issue 3-4.

(8)  State, Constitutionalism, and the Management of Ethnicity in Africa, by Eghosa Osaghae
2005 Volume 4, Issue 1-2

(13) China-Africa Relations: A Neo-Imperialism or a Neo-Colonialism? A Reflection, by Tukumbi Lumumba-Kasongo
2011 Volume 10, Issue 2-3.

(14) The Question of the Future of Indian Muslims in Malaysia: The Post-Mahathir Legacy Era, by Ahmad Noor Sulastry Yurni
2012 Volume 11, Issue 1-2.

(15) The Informal Sector as a Catalyst for Employment Generation in Lagos State, Nigeria, by  Akeem Ayofe Akinwale
2012 Volume 11, Issue 3.

(18) Leadership of University Women for Development in the Democratic Republic of Congo: A Critical Reflection, by Jacqueline Nembe Songu Luhahi
2015 Volume 14, Issue 3.

The journal presents a scholarly account of studies of individuals and societies in Africa and Asia. Its scope is to publish original research by social scientists in the area of anthropology, sociology, history, political science and related social sciences about African and Asian societies and cultures and their relationships.

Articles for publication in African and Asian Studies can be submitted online through Editorial Manager.