The publication of this journal was one of the consequences of the growing interest among scholars in music-related aspects of Greek and Roman culture. The inspiration for it emerged and took shape during discussions between members of The International Society for the Study of Greek and Roman Music and Its Cultural Heritage, better known as MOISA: but it soon became clear that this new endeavour would have important relevance in various areas of scholarship—not only classical studies and musicology, but also ancient philosophy, archaeology, iconography, papyrology, epigraphy, reception studies and many others—and hence attract the potential interest of a global audience, as it actually did.
Greek and Roman Musical Studies celebrates its 10th Anniversary
Subject Catalogs  |  Price Lists  |  Library Recommendation Form  |  Privacy Policy
BRILL | Plantijnstraat 2 | 2321 JC Leiden | The Netherlands
Phone +31 (71) 53 53 500 | E­mail: marketing@brill.com 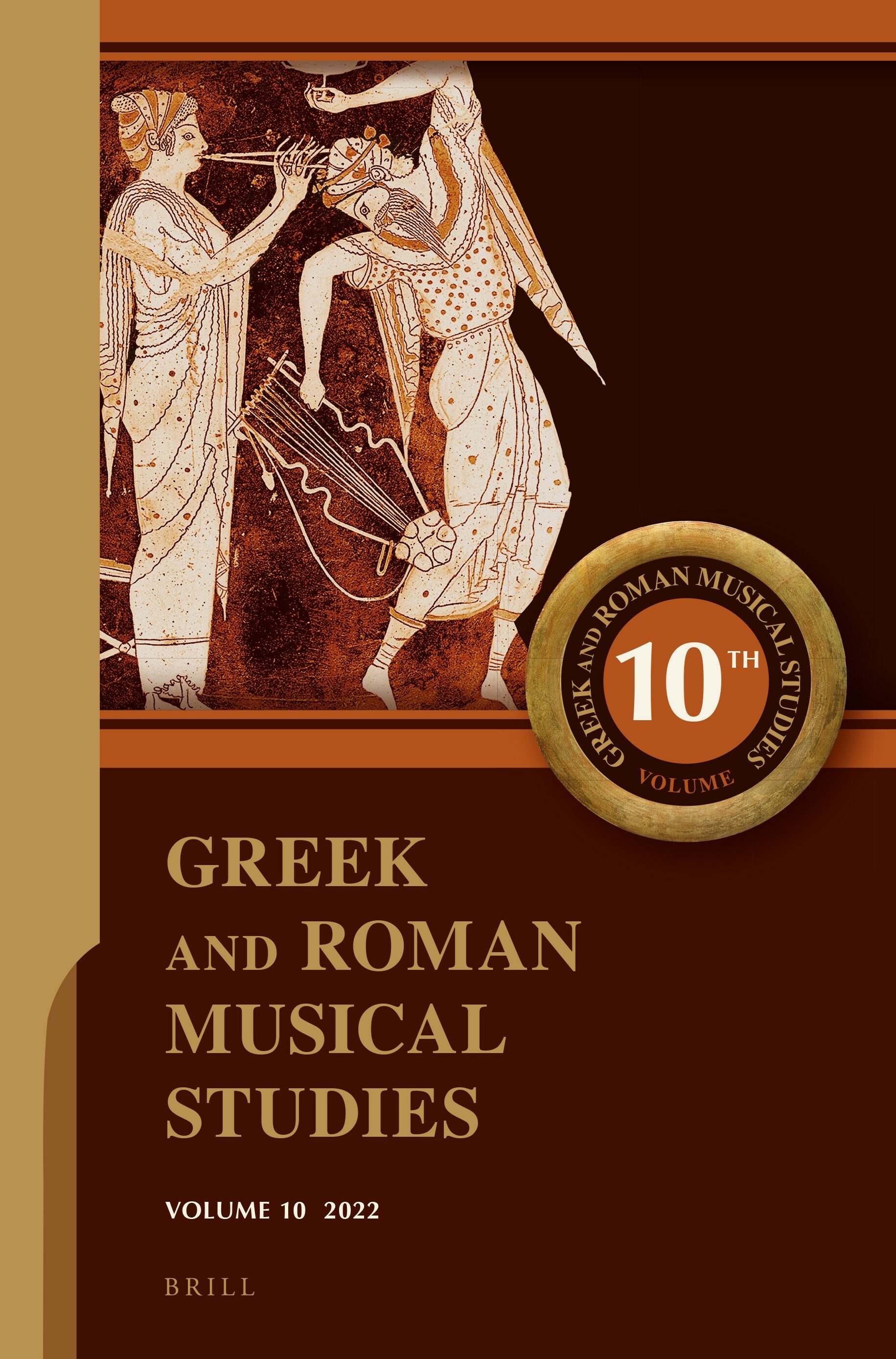 The reflection and value of this transversality, in terms of topics and approaches, is well displayed by the fascinating diversity of the contributions that, over the last ten years, the journal has published under the expert guidance of its Founding Editor, Andrew Barker: volume 10 is dedicated to his memory. To evaluate the impact of our publication, the second issue of volume 10 will also include a number of articles that take stock of the state of research in the field and the relationships with other disciplines within the humanities.
As a tribute to the scholars who, with passion and dedication, have contributed to the success of GRMS, in the course of this year Brill will provide free access to a selection of articles that illustrate the path we have taken so far. We decided to start with the works of two outstanding scholars who honoured the journal with their contributions in the past but, unfortunately, are no longer with us.
The first, by Martin West, is one of the papers that GRMS published on the fifth-century BC ‘Musician Grave’ found in Athens in 1981, focusing on the papyrus roll and the four writings-tablets (the earliest items of this kind discovered in mainland Greece) found in an extraordinary archaeological site.
The second article, by Andrew Barker, discusses (for the first time ever) the numerous allusions to music included in the historical work of Dionysus of Halicarnassus titled Roman Antiquities, which elaborates the Greek roots of Roman civilization.
I hope you enjoy these. Stay tuned for the next selection!
Eleonora Rocconi (Editor in Chief)
Stefan Hagel, Musics’, Bellermann’s Anonymi, and the Art of the Aulos, «GRMS» 6.1 (2018).
“This paper of Stefan Hagel opens a new chapter of history of musicology and musical teaching and is full of important insights in difficult problems”.
- Egert Pöhlmann, editor GRMS
***
Marco Ercoles, New Music. What Revolution in Rhythms?, «GRMS» 7.1 (2019).
“Rhythms in Greek drama are our key to understanding music in Greek drama, and I can hardly imagine a more solid treatment of this issue with regard to the ‘New Music’ than this”.
- Kamila Wyslucha, reviews editor GRMS
***
Armand D’Angour, Recreating the Music of Euripides’ Orestes, «GRMS» 9.1 (2021)
“Bringing ancient Greek music back to life is a dream of many ancient music scholars. It finds its fulfillment in this paper”.
- Kamila Wyslucha, reviews editor GRMS
***
Francesco Pelosi, Music for Life. Embriology, Cookery and Harmonia in the Hippocratic On Regimen, «GRMS» 4.2 (2016).
“This engaging article written by Francesco Pelosi delves deeply into the notion of harmonia in the Hippocratic treatise On Regimen, highlighting its relationship with the technai. It focuses on musical harmonia as both the most appropriate model for the description of the beginnings of life (embriology) and the best term of comparison for cookery and the capacity of the tongue to distinguish between different flavours".
- Antonietta Provenza, associate editor GRMS
***

Martin West, The Writing Tablets and Papyrus from Tomb II in Daphni, «GRMS» 1 (2013)
“Martin West honoured the journal with this article - which is one of the papers that GRMS published on the fifth-century BC ‘Musician Grave’ found in Athens in 1981, focusing on the papyrus roll and the four writings-tablets (the earliest items of this kind discovered in mainland Greece) found in an extraordinary archaeological site.”

- Eleonora Rocconi, editor in chief GRMS
***
Andrew Barker, Dionysius of Halicarnassus on Rome’s Greek Musical Heritage, «GRMS» 5.1 (2017)
“Andrew Barker, the founding editor of GRMS, discusses in this article (for the first time ever) the numerous allusions to music included in the historical work of Dionysus of Halicarnassus titled Roman Antiquities, which elaborates the Greek roots of Roman civilization.”

Egert Pöhlmann, Fifteen Years of Enquiries in Ancient Greek and Roman Music (2004–2018), «GRMS» 7.1 (2019)
“Egert Poehlmann, one of the world's most renowned experts in the field, provides a thorough and passionate overview of the summer seminars on ancient Greek and Roman music which were organised first in Corfu, Greece, and then in Riva del Garda, Italy, from 2004 to 2018. The papers, lectures, discussions and workshops held in these meetings have proved to be invaluable occasions for building rapport among students and scholars with an interest in ancient Greek music, and for testing new ideas and research approaches”.
- Massimo Raffa, editor GRMS
***
Pierre Destrée, Aristotle and Musicologists on Three Functions of Music, GRMS» 5.1 (2017)
“Many scholars have interpreted a passage in Aristotle’s Poetics as inferring that Aristotle thought music was not important to the workings of Greek tragedy. Pierre Destrée demonstrates that in fact Aristotle viewed music as a key component of the mimesis that produces tragic catharsis”.
- Timothy Moore, editor GRMS
***
Anna Conser, Pitch Accent and Melody in Aeschylean Song, «GRMS» 8.2 (2020).
“Anna Conser develops a method of measuring the degree of melodic correspondence between responding stanzas in Greek song using patterns of pitch accents. The method provides a new way of analyzing the choral songs of Greek tragedy”.

- Timothy Moore, editor GRMS
***
Massimo Raffa, Ancient Musical Writings as Persuasive Texts, «GRMS» 9.2 (2021)
“In this paper, Massimo Raffa deals with ancient Greek treatises of musical theory from a novel and interesting point of view, i.e. their communicative strategies, with a focus on recurring argumentative patterns (e.g. the reference to everyday life experience as evidence). Case studies are Ptolemy’s Harmonics and the extant fragments of Archytas’ and Theophrastus’ works”.

Interested in more? Subscribe to our Newsletters and stay up-to-date with our publications, conference visits, discounts, reviews and news.
Social Media Overview